For as long as anyone can remember, Agnieszka’s tiny village has lived under the shadow of the Wood, a forest possessed by dark magic that corrupts everything and everyone that ventures too close to its borders. Fortunately, the village is also protected by the Dragon — not a literal dragon, but a powerful wizard whose magic helps to keep the Wood at bay. But the Dragon demands a price for his services: every ten years, he takes a girl from the village back to his tower with him. The girls always return at the end of ten years, apparently unharmed, but they never stay in the village for long. Agnieszka was born in a Dragon year, so she has the potential to be the one chosen as the next tribute. But everyone knows the Dragon will choose Kasia, the kindest and most beautiful girl in the village, who happens to be Agnieszka’s best friend. Agnieszka already hates the Dragon for taking Kasia away. But of course, when the Dragon actually comes, it’s Agnieszka whom he takes. At first, torn from everything she’s ever known, Agnieszka is shocked and afraid, and the Dragon treats her with coldness and contempt. But when she discovers that she herself has magical abilities, she is eventually able to stand with the Dragon in the fight against the Wood.

This is, hands down, my new favorite book of the year so far! Everything about the lush, magical writing completely sucked me in; I wanted to devour it and savor it at the same time. I’m actually somewhat at a loss to describe exactly why this book worked so well for me. For starters, Agnieszka is a heroine after my own heart. While she’s not immune from fear and self-doubt, she doesn’t allow those emotions to rule her life. She also remains staunchly loyal to her friends and family back home, and when Kasia needs help later in the novel, Agnieszka is the first person to rush to her aid. I also really grew to love the Dragon, although he’s an indisputable jerk at first — a bit Darcy-esque, in a way, which possibly explains things. 🙂 And the plot is just as compelling as the characters: I completely believed in the menace of the Wood and Agnieszka’s growing belief that it needs to be stopped once and for all. In short, have you ever started a book and felt like it was written specifically with you in mind, because it has everything you love and unfolds so perfectly? Uprooted is definitely one of those books for me! It’s everything I want my epic fantasy to be, and I wholeheartedly recommend it!

Well, I forgot to mention that the Once Upon a Time IX event at Stainless Steel Droppings ended last Sunday, June 21! The challenge was to read at least one book within the genres of fantasy, fairy tales, mythology, and/or folklore. I committed to reading one book but actually read three:

I really enjoyed all of these books, but Uprooted is the standout — it will undoubtedly end up on my top 10 books of the year! I haven’t had a chance to write my review yet, but trust me: if you like fairytale-inspired fantasy with a kickass heroine and a slow-burning romance, you should definitely read this book!

If you participated in this challenge, what books did you read? Which were your favorite and least favorite? Did you discover any great new authors or books to recommend?

Jessamin has recently left her sunny island home of Melei to study at the prestigious university in Albion. But she hates the cold Alben weather and the narrow-minded Alben prejudices she is constantly exposed to because of her heritage and skin color. She is determined to endure the next few years and then leave Albion forever, but a chance meeting with a charming nobleman changes the entire course of her life. Finn Ackerley is attractive and wealthy, and he seems to be genuinely interested in Jessamin. He also happens to be an extremely powerful magician, and he possesses secrets that could have dire consequences for both Albion and the entire world. As Finn fights to save his country against the wicked, scheming Lord Downpike, Jessamin is caught in the middle. And when Lord Downpike discovers her relationship with Finn, he doesn’t hesitate to use her as a pawn in his power struggle. Can Jessamin outwit this deadly adversary and help Finn, all while remaining true to herself?

Historical fantasy is a genre I really enjoy, so I was predisposed to like this book, but I was a bit disappointed in the execution. There are a lot of really great ideas in the novel, but I wanted almost all of them to be explored in a lot more depth! For example, even though the book is set in a fictional world, it’s clearly meant to explore the issue of colonialism, but that side of things felt a bit superficial to me. I also loved the magical elements of this world, but in my opinion, the book doesn’t delve deeply enough into the history or the current power struggle with magic. The romance between Jessamin and Finn was adorable, but it also seemed fairly lightweight; I never truly connected with the characters or had particularly strong emotions about them getting together. Finally, the plot is resolved very abruptly in the end. I think all of these issues could have been resolved if the book had been longer, and I feel bad for nitpicking so much because that might have been the publisher’s fault rather than the author’s. And it is a light, enjoyable read; it’s just a bit insubstantial for my taste. But I would certainly try something else by Kiersten White in the future.

This novel, set in early medieval Ireland, tells the story of Blackthorn, a young woman who has been imprisoned by a cruel chieftain and sentenced to death. But on the eve of her execution, she is saved by one of the Fair Folk, who grants her freedom under two conditions: she must assist anyone who asks for her help, and she cannot seek revenge against her jailer for seven years. Blackthorn reluctantly accepts these terms and escapes from the prison, along with fellow prisoner Grim. At first, the two travel aimlessly, with Blackthorn occasionally using her skills as a wise woman to help those who need medical attention. Eventually, they arrive in the kingdom of Dalriada, where Prince Oran asks Blackthorn for help. He is about to be married to Flidais, the daughter of a neighboring chieftain. He has fallen in love with her because of the letters she has sent him; but when Flidais arrives in person, she seems completely unlike the woman of the letters. Blackthorn and Grim help Oran to investigate his bride’s seemingly changed personality, and their search eventually leads to a shocking discovery about the nearby Dreamer’s Wood.

I’m a big fan of Juliet Marillier’s books, and I’m pleased to say that I liked this one also. The novel is narrated by Blackthorn, Grim, and Oran in turn, and each character’s voice is very specific and distinct from the others. Blackthorn is clearly the book’s true heroine, and I found her an interesting protagonist, especially because most of her motivation at this point stems from her (justifiable) rage at being imprisoned for so long. In other words, she’s not a very nice person, and her traumatic past often leads her to assume the worst of other people. But her flaws make her a compelling character, and I look forward to seeing how she continues to develop as the (planned) series progresses. Grim is also an intriguing character, although not as well fleshed out as Blackthorn; I’m eager to learn more of his backstory. Like most of Marillier’s novels, the pace of this one is quite slow, and I’m not sure the mystery with Flidais needed to be as drawn-out as it was. That said, I did like the book and will plan to continue with the series; I believe book 2 comes out later this year. 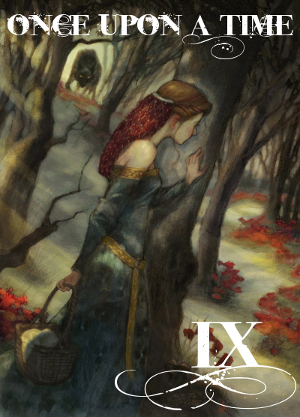 It’s officially the first day of spring, which means it’s time for Carl’s annual Once Upon a Time Challenge! The “rules” are simple: Read at least one book that fits within the genre of fantasy, fairy tales, mythology, or folklore. You can choose to read from all four genres or just one, short stories or novels, one book or 100. There’s even a “Quest on Screen” for people who want to watch movies and TV shows that fit within these genres!

Personally, though, I’m only committing to one book. I have Dreamer’s Pool by Juliet Marillier from the library, and I’m looking forward to reading it within the next few weeks. After that, I’ll just see what happens — although I suspect I may end up adding a few more books to my total. 🙂 Are you participating in this event? If so, what are you planning to read?