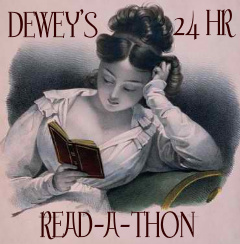 The October 2016 24-hour readathon has officially begun! Here’s where I’ll update my progress throughout the day. Even though I can’t read for all 24 hours this time, I’m looking forward to a fun, book-filled day!

1) What fine part of the world are you reading from today? East Coast USA.
2) Which book in your stack are you most looking forward to? Probably Which Witch? by Eva Ibbotson. I love her adult novels, but I’ve never read any of her children’s books before, and this one looks adorable!
3) Which snack are you most looking forward to? The Smartfood white cheddar popcorn, obviously!
4) Tell us a little something about yourself! I am addicted to cute stationery and love writing letters.
5) If you participated in the last read-a-thon, what’s one thing you’ll do different today? If this is your first read-a-thon, what are you most looking forward to? I feel like I say this every time, but I really want to take some time to visit other people’s blogs and interact more with my fellow readathon-ers. I was pretty active on Twitter last time, and I enjoyed that a lot!

Although I haven’t been reading nonstop since the start time, I am pretty happy with my readathon progress so far! My first book of the day is appropriately called Beginning with a Bash by Alice Tilton. It’s a fun Golden Age mystery that I could definitely picture as a movie! I was already halfway through the book  before the readathon began, and now I’m almost done, so I hope to finish it soon! But I’m about to head out the door for a couple hours, so I’ll unfortunately have to take a reading break.

Also, I did the Six Word Story challenge: She wanted to but never did.

Finally home after a choir rehearsal and a spontaneous lunch with a friend. Now it’s time to catch up on some mini-challenges! I tweeted my answers for A Book and a Snack,  A Puzzling Challenge, and Happy Birthday Poem, so check out my Twitter feed if you’re curious. And now, back to reading!

Just finished my second book of the readathon, P.S. I Like You by Kasie West. It was, in a word, adorable! And now to catch up with some challenges:

I could pick so many answers for the Literary World Tour challenge, from Jane Austen’s England to Middle-Earth. But the first literary world that really drew me in, that made me believe it was real, was the Damar of Robin McKinley’s The Blue Sword and The Hero and the Crown. Those are some of the first fantasy novels I remember loving, and the setting absolutely captured my imagination. If I could go there, I’d want to spend at least a few weeks, ideally during the laprun trials (to observe, not to compete). But a hot, desert climate is not my ideal situation, so I don’t think I’d want to stay there permanently!

I also entered the Red, White, and Blue challenge on Twitter. Now it’s on to my next book, which I think will be We Have Always Lived in the Castle by Shirley Jackson. I want to read something a little spooky since Halloween is almost here…but I want to do it while there’s still a bit of daylight outside! 🙂

Just finished We Have Always Lived in the Castle, which I simultaneously liked and found deeply disturbing! Next up is Eva Ibbotson’s Which Witch?, which should provide a nice contrast.  And I’m thinking about the Video Game a Book challenge…if it doesn’t already exist, a Pride and Prejudice video game might be fun! It would be a quest-type game where the object is, of course, to marry Mr. Darcy. The player would have to complete tasks such as mastering a tune on the pianoforte, dancing a quadrille, playing a hand of whist, and finding Georgiana’s portrait at Pemberley. The Big Boss would be Lady Catherine de Bourgh, whom the player would have to fight in an epic ninja battle. Man, I really want this to exist now!

Just checking in. Halfway through Which Witch? now, which is just as delightful as I expected it to be. Not sure how much longer I’ll be able to stay awake, to be honest. I was hoping to make it to Hour 18 or 19, but I may not last that long! *blush*

It’s after 3:00 a.m. here, so I think it’s officially time for me to head to bed. I did finish Which Witch? and even managed to read one more book, Goodnight Tweetheart by Teresa Medeiros. I also squeezed in a few more challenges, but now I need to call it quits. Good luck to those who are still reading, and I hope everybody has/had as much fun as I did!