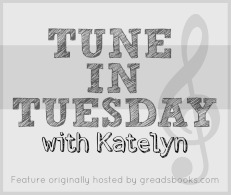 So I haven’t done a Tune in Tuesday for a while, but my excuse is that GReads! hasn’t been doing it either! School and life have kept her busy, which is entirely understandable. But while she’s on a temporary Tune in Tuesday hiatus, she has passed the torch to Kate’s Tales of Books and Bands. So thankfully, this lovely opportunity to share music every week and discover some new songs still exists!

This week I’m sharing songs by an artist whom I don’t quite know if I like yet! I’ve listened to several songs by Tom Waits now, some of which I really like and some of which I find bizarre (to say the least). He’s an acquired taste, but it’s a taste I’m really hoping to acquire. So here is an amusing song called “The Piano Has Been Drinking”:


And another, sweeter song called “I Want You”:

2 thoughts on “Tune in Tuesday with Katelyn: The balcony is on the make”