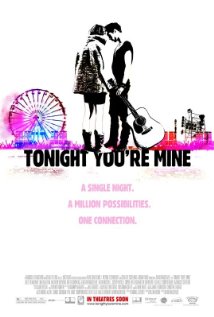 Recently I decided to try out Netflix’s DVD service so that I could finally watch some new releases I’d been wanting to see. While I was browsing through their offerings, I came across a movie called “Tonight You’re Mine.” The synopsis intrigued me:

Shot over the course of five days at Scotland’s annual T in the Park music festival, this unconventional romance centers on a pair of bickering rockers who are handcuffed together; 24 hours later, they’re falling in love.

Yes, the setup is a total cliché, but I’m a sucker for movies about music and musicians, so I figured I’d give it a chance. And I’m really glad I did! The two lead actors are very appealing, particularly Luke Treadaway as Adam. (To be fair, I like looking at scruffy rock stars, so I might be a bit biased!) They have great chemistry together and manage to make the handcuff thing look very natural and realistic.

I also loved the fact that the movie was filmed at an actual music festival; it really captured the energy and magic of 85,000 people coming together to enjoy some great songs. A lot of real bands are featured in the film, and while I had never heard of most of them before, I was happy to be introduced to some new music!

It’s not a perfect movie, by any means. Because the movie is short and was filmed on a very tight schedule, the plot and character development are relatively slight. Also, it’s very hard to hear some of the dialogue due to the challenges of filming at a live event. But there’s enough here to be entertaining for anyone who likes music and rom-coms. This scene alone, where the heroine’s band is playing a gig (with the hero still handcuffed to her arm), sold me:

Unfortunately the end of the song is cut off, but you get the idea. 🙂

There’s also this charming song from the very beginning of the film (actually written by Treadaway):

It’s so freakin’ catchy, I can’t even take it!

Long story short, “Tonight You’re Mine” isn’t going to be one of my all-time favorite movies, but it’s definitely worth watching!

4 thoughts on “Why you should watch “Tonight You’re Mine””