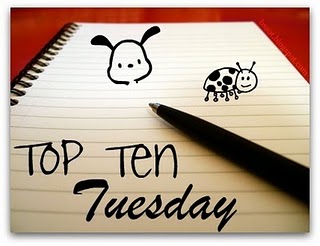 Some weeks I’m not at all inspired by the Top Ten Tuesday topic…and then other times, like this week, I wonder how I’ll ever be able to limit myself to 10 choices! This week’s topic is those books you just HAD to buy right away, but now they’re lingering on your shelves unread. This happens to me all the time, so I’ll just pick 10 of the many options at random. Here we go:

1. Jasper Fforde, The Woman Who Died a Lot — I’m a huge fan of Jasper Fforde’s, and I buy all his books right away in hardcover. So I’ve owned this latest installment in the Thursday Next series for several months now, yet I still haven’t gotten around to it!

2. Robin McKinley, Pegasus — OK, this one isn’t entirely my fault. Robin McKinley is one of my relatively few autobuy authors, so I immediately snatched this book up when it first came out a few years ago.  What I didn’t realize at the time, but learned subsequently from reviews, was that this book is just the first half of the story…and the second half doesn’t come out until 2014! Since I didn’t want to be left hanging halfway through, I opted to wait until I could read both books together.

3. Rose Melikan, The Counterfeit Guest — I read Melikan’s first book a while ago, The Blackstone Key, which is a mystery novel set in the 1800s. I remember liking it, so then I bought this book, which is the second installment of the series. Sadly, I still haven’t read book #2, even though it’s been a few years by this time.

4. Chris Wooding, Retribution Falls — I bought this one when Borders was having all its crazy going-out-of-business sales. The cover blurb makes it sound like “Firefly,” which is what piqued my interest.

5. Kristin Cashore, Graceling — This book has been on my shelves for an unconscionable length of time at this point. I really do think it sounds good, so I have no idea why I haven’t started it yet!

6. Seanan McGuire, Discount Armageddon — I absolutely love McGuire’s Toby Daye series, so I bought this book (first in a new series) immediately when it came out. Now book #2 is in stores, but I still haven’t read #1!

7. Kevin Hearne, Hexed and Hammered — Since they’re in the same series, I’ll count them as one list item. I also bought and read Hounded, the first book in this urban fantasy series featuring a druid, and I thought it was good but not great. So I have no burning desire to continue with the series, but I already own books #2 and #3. Hopefully I’ll get to them sometime soon so that I can make room for new books on my shelves.

8. P.G. Wodehouse, The World of Jeeves — I snatched this up a couple years ago at a library sale, because everyone needs to own some Jeeves & Wooster! For some reason I haven’t dipped into it yet, but it’s comforting just to have it on the shelves. 🙂

9. Karin Lowachee, The Gaslight Dogs — This book just sounded really cool, and I think I read a few good reviews of it, so I bought it. Haven’t been in the mood for it yet, but someday!

10. Georgette Heyer, The Spanish Bride — If you’re thinking, “An unread Heyer? Blasphemy!” I’d be inclined to agree with you. But if An Infamous Army is anything to go by, this book will be extremely focused on historical details — which is not a bad thing, but it does require more motivation for me to pick up the book!

2 thoughts on “Top Ten Tuesday: Books I just HAD to buy but still haven’t read yet”