Friday was an early day because I’d bought a ticket to the Children’s Author Breakfast, which featured Jason Segel, Carl Hiaasen, Mem Fox, and Jeff Kinney. The breakfast itself was TERRIBLE (stale bagels and muffins, anyone?), but the talks were an absolute joy. Jason Segel talked about how his own childhood nightmares inspired his forthcoming children’s book — and how he used to wear a Superman cape under his clothes for a long time as a kid, “just in case.” Carl Hiaasen talked about adapting his eccentric character Skink for a younger audience, expressing shock that anyone would ever want him to write a book for children. Mem Fox read from her forthcoming book Baby Bedtime, which may or may not have caused me to tear up (hint: it did!). And Jeff Kinney made a convincing case for why his Wimpy Kid is a better protagonist than Harry Potter. 🙂 Even though I don’t tend to read a lot of children’s lit, I’m really glad I went to this event!

After the breakfast, I rushed over to the Quirk Books booth to snag one of their totes: 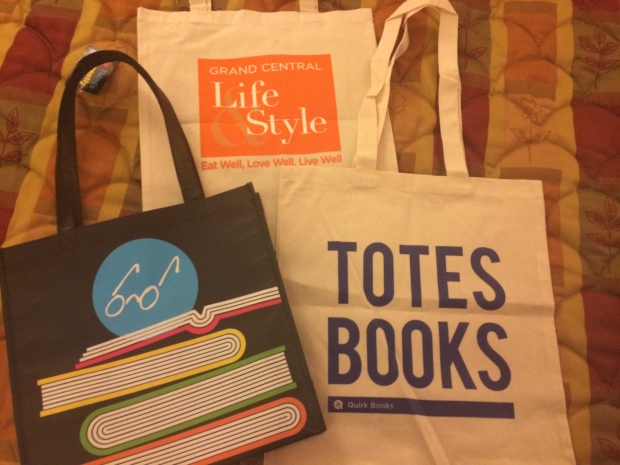 It’s the one that says Totes Books — adorable, no? And by the way, if you need tote bags, BEA is definitely the place to be; I came home with 4, and I could have gotten a lot more if I’d wanted them! I also love that Chronicle Books number (black with the glasses logo).

Then I went to something called “Hot Fall Fiction 2014,” but I’m pretty sure I left before it was over, because it was clearly a device for publishers to peddle a select few books from their fall lists — and I wasn’t particularly interested in any of the books. So instead I picked up a few more galleys from the exhibitors’ booths, including Mortal Heart by Robin LaFevers, which I ended up reading on the train ride home!

Then I went to an absolutely fascinating panel called “Girl Books, Boy Books, and Gender Hooks,” which was about the way female-authored fiction (both literary and genre) is marketed and packaged differently than male-authored fiction. Author Jennifer Weiner was there with some very sassy, pointed remarks about covers of books written by women — the pink or lime green backdrop, the images of legs and shoes, the faceless girls, etc. The panelists also talked about women in the publishing industry, critical responses to female-authored vs. male-authored books, and more. I basically came away from this panel feeling sad that women (in general) will read any type of book, but men (in general) won’t read a book that seems too “girly.” And of course, there are no easy answers about how to change these behaviors.

Anyway. So after lunch, which was a truly terrible $6 hot dog from the Javits Center (seriously, GO ELSEWHERE FOR FOOD when you go to BEA!), I lined up for a copy of Morgan Matson’s Since You’ve Been Gone. She was giving out new hardback copies and signing them, which was amazing! I read the book while I was still in NYC and thought it was an absolutely perfect summer read! I later waited in Elizabeth Wein‘s line, hoping against hope that she would sign my copy of Code Name Verity that I’d brought from home, because I love it SO MUCH — and she did! And when I tweeted about it excitedly, she actually responded! So that was definitely a highlight of BEA for me.

Finally, I attended yet another panel, this one entitled “The Journey of a Book: From Writer to Reader.” I wasn’t expecting it to be about one particular book, but it was — and it turned out to be better than I expected! The book in question is The High Divide by Lin Enger, which will be published by Algonquin in September. Mr. Enger was there, as were his agent, his editor, and the person in charge of the marketing campaign for the book. Each person talked about his/her role in creating the book, and they all answered questions about their part of the process. It was fascinating to see the journey of this book from start to finish!

So that was the end of my participation in official BEA events. BUT. I heard through the grapevine that a bunch of YA authors would be at a children’s bookstore called Books of Wonder and that Maggie Stiefvater would be among them. Now, I knew Ms. Stiefvater would be coming to BEA on Saturday to sign copies of Sinner, but what I really wanted was for her to sign my copy of The Scorpio Races, which I LOVE. So one of those lovely girls whose names I can’t remember (I am the worst networker ever!) suggested that I’d have better luck at Books of Wonder than at BEA itself. And y’all, I am so glad I took that advice! The authors present were Garth Nix, Jennifer Armentrout, Alethea Kontis, Maggie Stiefvater, Alaya Dawn Johnson, Gretchen McNeil, and A.G. Howard. 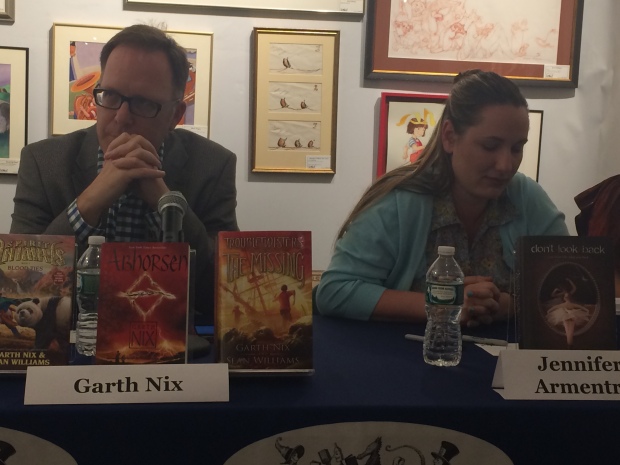 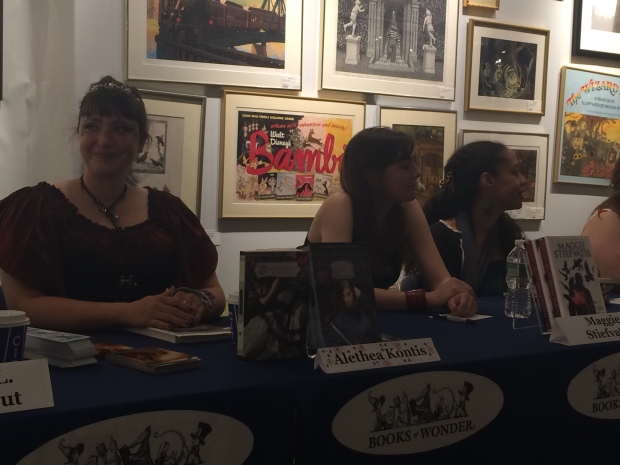 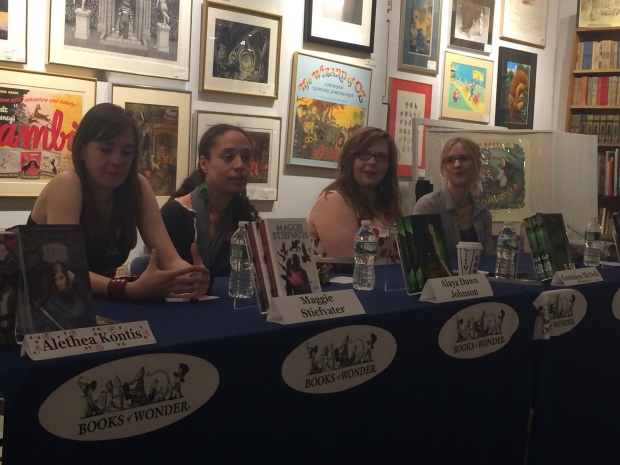 Sorry about the poor image quality, but let it be known that I am not using a zoom. THAT IS HOW CLOSE I WAS TO GARTH NIX. Ahem.

So these authors were a lovely bunch; they talked about their latest releases, answered a bunch of really interesting questions from the audience, and graciously signed our books. And Maggie Stiefvater drew a horse on my copy of The Scorpio Races, and I love it forever. I’m so glad I decided to brave the NYC subway and go to this event!